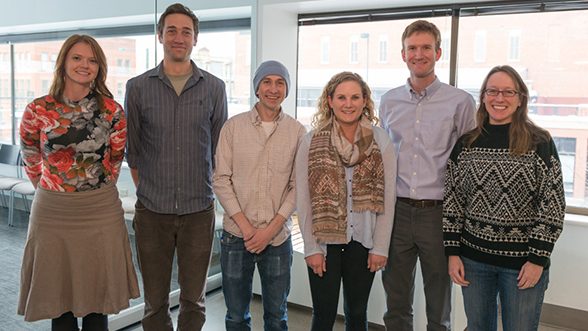 The CAP team is made up by, from left, Stacy Ester, Joel Miller, Adam Buehler, Nora Bland and William Dolenshek, along with faculty advisor, Jennifer Steffel Johnson, PhD.

A team from the CU Denver College of Architecture and Planning (CAP) earned a $10,000 prize for finishing as runner-up in the national HUD Innovation in Affordable Housing student design and planning competition. The recent competition took place in Washington, D.C.

Four teams were selected as finalists and, for the first time, a team from CAP reached the final round. The CU Denver team was made up by Stacy Ester, Joel Miller, Adam Buehler, Nora Bland and William Dolenshek, along with their proud faculty advisor, Jennifer Steffel Johnson, PhD, assistant professor CTT of urban and regional planning.

All of the projects for this year’s competition were located in Dover, N.H. 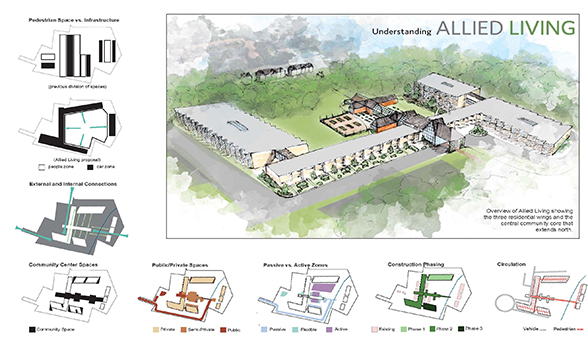 One of the team’s drawings from its “Allied Living” project.

“The project was affordable housing for seniors and folks with disabilities,” said team member Buehler. “We talked about how this is commonly done and how these people are commonly regarded in our society. We wanted to flip that narrative/expectation and push for greater connection of the residents to the rest of the community, honoring the fact that all people have a lot to teach and share, and shouldn’t be pushed aside, isolated or forgotten.”

The team’s strategies were clearly viewed as innovative solutions, based on its strong second-place finish. All teams made presentations on their projects in front of a panel of experts.

Buehler said the competition was equal parts “inspiring and exhausting” – the latter because the students were simultaneously working on studio projects and other obligations. He enjoyed the fact that team members brought different lenses and skill sets to the project as they came from architecture, planning, landscape architecture and business/real estate disciplines. He thinks more cross-disciplinary activities such as this should be promoted because it allowed for rich collaborations outside his own architectural learning area.

“I think we were a successful team because we all sincerely care about the issue of affordable housing,” Buehler said. “And we pushed each other, raised the bar for each other and wanted to show one another our best work.”

CU Denver’s downtown location is beneficial to architects, said Buehler, who is working toward a MArch — master of architecture — degree. As part of his studies he participated in the Design Build program, which Buehler described as “an awesome experience practicing translating design into construction.

“Being in downtown Denver reminds me of the strengths and challenges we have as a city – and, ideally, how we as designers can play a role in addressing social issues,” Buehler said. “I think there a lot more opportunities out there to engage in the city and leverage the fact that we are an urban university. I look forward to seeing that happen.”

Before going back to school for architecture, MArch student Adam Buehler worked with the Reach Program at RedLine in downtown Denver for nearly three years and got to know the artists there who were housing insecure.
“Sharing conversations and stories with them I began to look more at the built environment, the lack of affordable housing, and became curious about innovative ways to address these issues on a budget, in short periods of time,” he said. “The tiny house model isn’t the answer to the affordable housing crisis, but it is a very strong tool that I hope we utilize more here in Denver, including on the Auraria Campus.”