Passionate about making the world a better place, the Johnsons said supporting education, the worldwide instrument for opportunity and improved lives, is an ideal way to do that. They are dedicated donors to both CU Denver and CU Boulder programs.

“I’ve told several people around the university that we want to make CU Denver the ‘Princeton by the Platte,’” said architect Don Johnson, as he looked toward the Platte River through the window of CAP Dean Nan Ellin’s office. “We have modest objectives,” the CU alumnus said with a grin.

The gift will be divided into three student-focused areas: $4 million to scholarships; $4 million to international programs (the Johnsons previously created CAP’s “Finland Initiatives” project); and $4 million to experiential learning – i.e. the Design Build program, another program they have supported for many years.

The Johnsons’ desire to give back to CAP is tied to a singular vision: making the program a recognized leader. “CAP is uniquely positioned in its location in the middle of the country, in a vibrant, growing city, to sit at the front table, including in the area of ‘arid architecture,’” Don said. 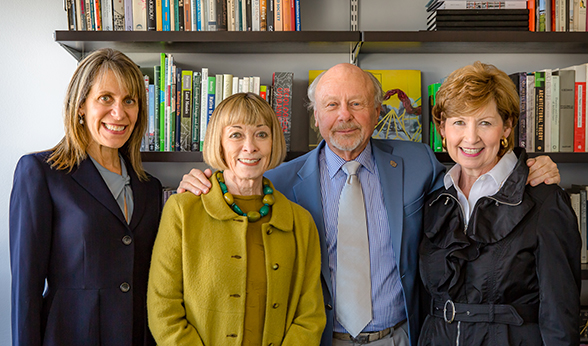 “You will see more and more stories about issues with water, and I think it’s one of the areas where CAP, in collaboration with other colleges here at the university, can become a world-renowned leader.”

The introduction of CU’s undergraduate program in architecture was an important step in CAP’s evolution, and placing the program at CU Denver, in the heart of Colorado’s thriving capital, was a “perfect decision,” said Don, who worked for several design and planning companies before launching his own firm. “The city is really the action for architecture in the state.”

Ellin, who came to CU Denver from the University of Texas at Arlington as CAP’s new dean last summer, provides just what the program needs now to make these visions happen, said Johnson, who sat on the 17-member committee that unanimously selected Ellin.

“She is a new jolt of energy, a whole new perspective,” he said, gesturing to a gift he gave Ellin – a 90-million-year-old fossil that houses a nicely preserved logarithmic spiral. Inspired by the spiral, they noted, CAP is evolving into the future. “Mark Gelernter, the previous dean (who retired in spring 2017), laid a strong foundation,” Johnson said, upon which Ellin can build. Ellin, he added, is an “integrative force,” noting that her diverse background allows her to effect synergies among CAP’s many disciplines.

‘I’ve told several people around the university that we want to make CU Denver the ‘Princeton by the Platte.’ – Don Johnson

“This is the perfect constellation of programs,” Ellin said. “It’s in the perfect location, a rapidly-growing city and beautiful region with a very strong community professionally, economically and politically.”

CAP can become a leader by asking the larger questions of why, Ellin said. Why are cities being designed and built in the way they are? What does that mean for water? What does it mean for transportation, public space, energy and equity?

CAP’s strategic mission, the dean said, is to ignite evolution that enriches places for people and the planet. “As a university, we have a clear strategic plan, and we know what the initiatives are. Our evolution as a college will be one step at a time, moving toward creating a building school for the 21st century.”

Deep roots in giving back

The roots of Don’s desire to serve the community stretch back to the turn of the 20th century. His grandfather, Dr. C.W. Bixler, was a well-known Boulder Valley physician and civic leader. He graduated from CU’s School of Medicine in 1907 – the first of four generations of the Bixler/Johnson family to graduate from CU Boulder. 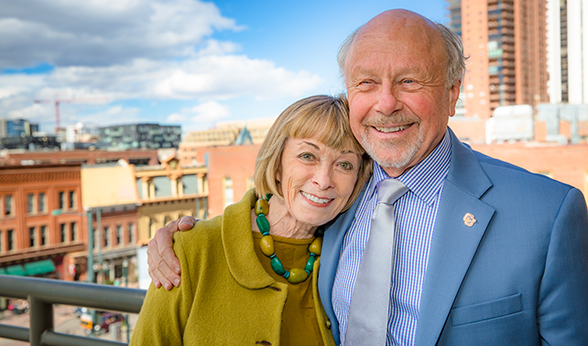 Maria and Don Johnson have been generous CAP benefactors for many years. They envision CU Denver becoming the “Princeton by the Platte.”

“I’m the third generation of our family to attend CU, and I’m working desperately on my granddaughter to be generation No. 5,” he said with a chuckle. “It’s a culmination of three generations of our family’s efforts, and the gift activates when Maria and I are gone. I couldn’t imagine a better thing more desperately needed in this country than education.”

Added Maria Johnson, “We just want to create a better future for the kids.”

Increasing international education opportunities for students is important to the Johnsons, who travel extensively, including to her native Finland. The Bixler Foundation has also established a new $200,000 endowment to provide travel awards to masters of architecture students at CU Denver.

“We’re one village,” Don said. “I feel very strongly that the whole international relations component is really an important part of education. These students graduating now will be practicing internationally. And they have to go to these places to understand the culture well enough to adapt and to adjust to what’s going on.”

Closer to home, the Johnsons are devoting another large part of their gift to experiential learning, specifically CAP’s Design Build program, headed by Assistant Professor of Architecture Rick Sommerfeld.

Experiential learning allows architecture and design students to learn by doing with their hands, often as part of socially conscious projects, Don said. “By doing that, they viscerally understand what you’re asking people to do; there’s no better understanding.”

Designating a significant part of the Bixler and Johnson families’ financial legacy to CU Denver scholarships goes along with their aim at making the world a better place. “All of the CU campuses are wonderful, but CU Denver especially reaches out to a less-advantaged part of our society,” he said. “Therefore, CU Denver in my mind is the most important to our society as a whole.”