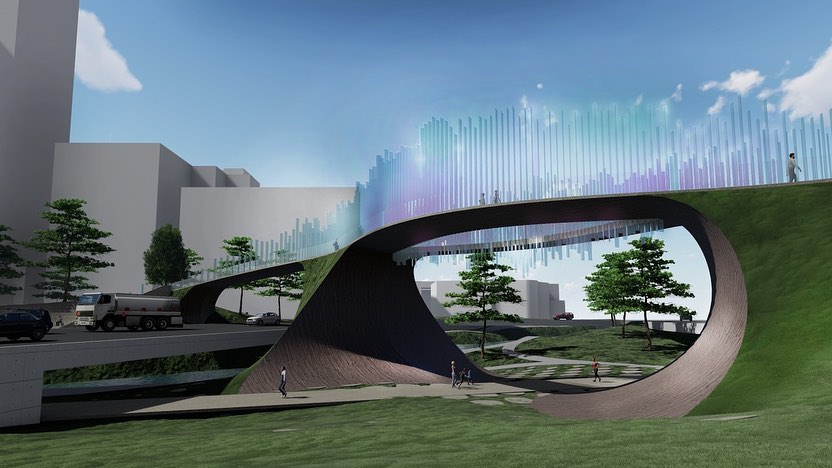 Exciting news! A team of CAP students – Nico Camero, Aria Dellepiane, Craig Riley and Zac Rott – advanced to the semifinalist round in the Imaginations competition, hosted by Walt Disney Imagineering. Over 300 teams nationwide were tasked with designing an iconic installation in their city or college campus that inspires, honors the past, and is a vision of the future. CAP’s team designed a bridge that connects the Auraria Campus to Downtown Denver.⁣

Here’s a description from the team:
⁣
Dubbed “Auralynx”, the CU Denver team’s project is a place for gathering, celebration, reflection and education. Auralynx safely links the Auraria Campus to Downtown Denver by enabling pedestrians and cyclists to bypass the eight busy traffic lanes of Speer Blvd. ⁣
⁣
The infinity loop represents a continuous flow of knowledge that intertwines the mutual campus-city relationship. CU’s motto (“Let Your Light Shine”) is embraced in the design for the many students, professionals and visitors who trek between the city and campus. Each person is reminded of the light that shines within them and which radiates outwardly into the community. ⁣
⁣
Just as individuals express themselves uniquely, the colors of the spectrum each play a role in the manifestation of a collective enlightenment. During the day, sunlight is gently captured and refracted, and views of the city, campus, mountains and creek are fostered. At night, LED lighting softly illuminates the pathways with a fluctuating glow of color. Localized auras of brightness follow along with each pedestrian via motion sensors. ⁣
⁣
The downtown loop features a public amphitheater alongside Cherry Creek. The Auraria loop features a naturally landscaped hill with areas for hanging out or hosting a small class outside. The central crossing is amplified by a gradually intensifying light feature above and an elegant, outdoor “chandelier” below. ⁣
⁣
As noted by Disney Imagineers, Auralynx is a “unique take on the prompt – a creation of an engaging, multifaceted, experiential installation that also serves a critical purpose and connects campus to city.” Auralynx is a sophisticated and ambitious design that could be a very compelling, architectural icon.