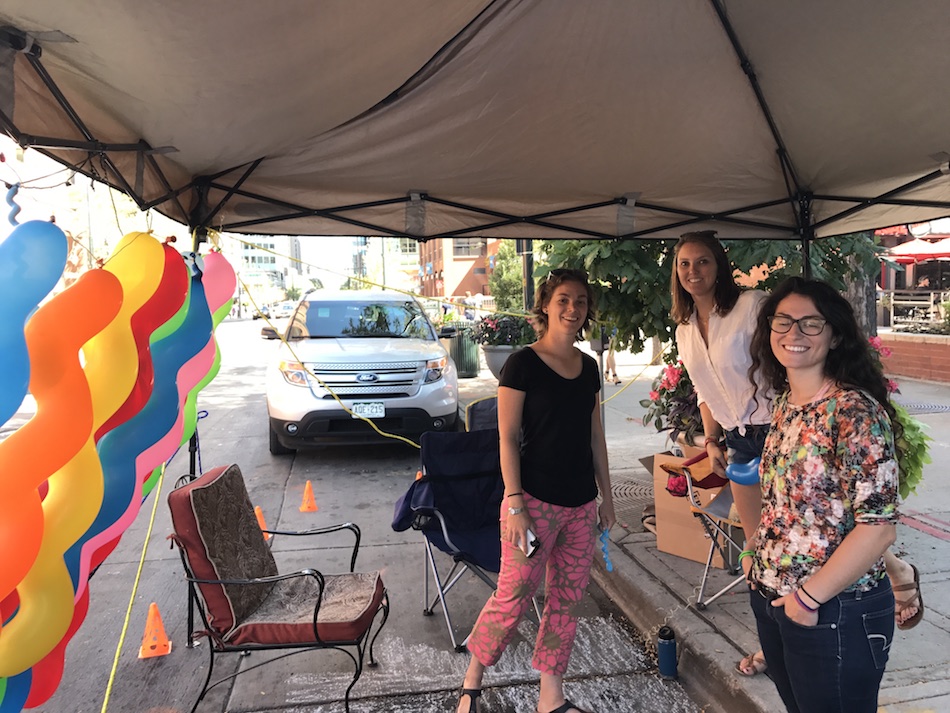 On September 15, 2017, students in the Master of Urban and Regional Planning program at CU Denver-headed by the officers of the American Planning Association student chapter (APAS)-participated in the annual Park(ing) Day outside of the College of Architecture and Planning at 14th and Larimer in downtown Denver.

Park(ing) Day, which began in San Francisco in 2005, began as a way to temporarily turn a metered parking space in the city into a temporary public space as a way to showcase what amenities we often give up to accommodate parking in dense urban areas. From its original founding, Park(ing) Day is now an annual, open-source global event where citizens, professionals and activists create their versions of temporary public space in urban places around the world. As such, the event's mission is to, "call
attention to the need for more urban open space, to generate critical debate around how public space is created and allocated, and to improve the quality of urban human habitat."

The theme of this year's Park(ing) Day contribution by MURP students was "urban jungle," which was constructed with the help of CU Denver students from the American Institute of Architects student chapter, as well as private engineering, planning and consulting firm Michael Baker International. Throughout the day, several dozen people stopped by the transformed parking spot to ask questions about the event, and drivers passing by at the nearby stoplight engaged with students.

Of this year's event, APAS President Kari Remmen said, "Park(ing) Day was a success because of the conversation it sparks. As planners, we need to understand the public opinion around the issues we are trying to address. Park(ing) Day gave us the opportunity to hear from people, as well as talk about the impacts of parking in our downtown urban spaces."

In addition to engaging the public, this year's contribution by MURP students focused on bringing together students in the first and second year of the urban planning program. Remmen noted that because the master's program is only a short two years, APAS has an important role to play in ensuring relationships are developed among students, as they are all future planners who will work together in the field.

Park(ing) Day takes place each year on the third Friday of September. Click here (http://parkingday.org/) for more information on the global event.