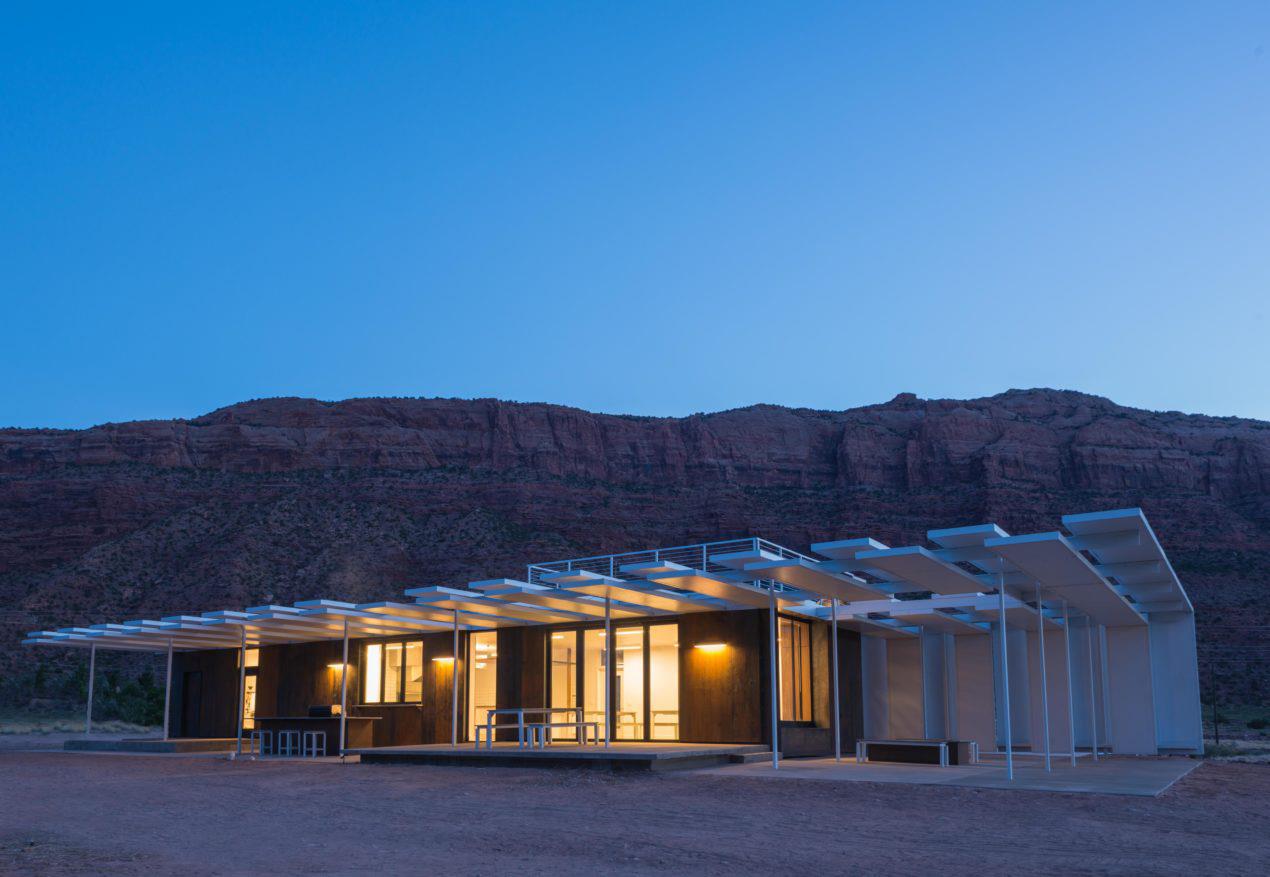 Confluence Hall is situated between the Wingate Cliffs and the La Salle Mountains just outside of Moab, Utah. The building serves as the main community space for the Colorado Outward Bound School’s Southwest Program. The students, staff, and instructors use the hall for course briefing, training, and community meals, with dormitories to the north, and the warehouse and workspaces to the south.

Located on the footprint of an old doublewide trailer (that was sold to help finance the project), Confluence Hall reused the foundation, patio, and existing infrastructure to keep costs low and the construction timeline brief.

The students worked with the staff and instructors of Colorado Outward Bound to create a successful structure that would best serve the organization. The team concluded that Confluence Hall should become a communal space that allows programmatic flexibility, mitigates the sun and wind, provides structural efficiency and uses a palette of honest material while contextually linking to the rest of the site.

The program is organized from north to south into four zones – exterior gathering, interior gathering, cooking, and “the spa.” The thresholds between each zone are divided by light and accented by walnut millwork. The flexibility of the program is realized by a series of operable openings. Between the indoor and outdoor spaces, large Nana Walls open to provide connections between interior and exterior cooking and indoor and outdoor dining. These openings allow the spaces to connect to one another for large raucous gatherings. A large operable walnut wall provides flexibility for the kitchen to be closed to the dining room, separating workspace from meeting space. Smaller, more intimate spaces are tucked within the walnut millwork, providing places of escape for smaller gatherings.

In “the spa” a large sink overlooks the bluffs to the west while serving both toilet compartments. A large, two-person shower is accessed from the outside, allowing guides coming in from the field a place to rinse off before heading into the building.

The building is set back from the western edge of the existing foundation. This simultaneously creates an exterior walkway, to minimize conditioned indoor circulation and act as a buffer from both the hot western sun and parking lot to the west. On the southern edge of the walkway, a concrete wall rises, allowing the large window in the “spa” to view the Wingate Cliffs to the west without seeing cars in the parking lot. On the northern edge of the walkway, a hung steel staircase descends from the rooftop deck, and the canopy that covers the north and east patio folds down the western side of the walkway linking to the patio beyond.

The canopy is constructed of four-inch insulated wall panels. The material was leftover from warranty work on a telecom building and scheduled to be discarded. The project recycles these panels, reimagining them as large louvers for the patio opening to the eastern view of the La Salle Mountains. The inherent structural capacity of the panels is leveraged to span large distances, minimizing the amount of steel structure required. Using a grasshopper script, the spacing of canopy panels and the structure was determined to allow for maximum sun penetration in the winter while allowing minimal sun exposure in the summer. Openings within the overhead canopy allow for fire-pits and a rooftop deck, while other panels are removed to reinforce the thresholds within the building.

Hot rolled steel panels with a hand-rusted patina clad the main portion of the building. The cladding helps relate Confluence Hall to other campus buildings clad in rusted corrugated steel. Window openings on the south and west of the structure are veiled with large shade apertures, reducing solar gain and providing depth and privacy for the spaces beyond.